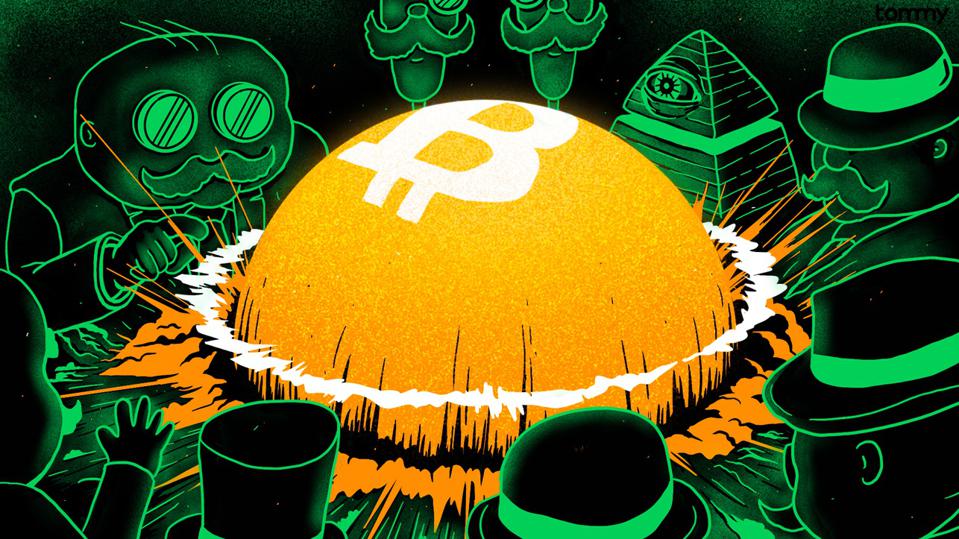 Bitcoin. There’s a whirlwind of hype, FUD, and headlines surrounding this new asset. With so much coverage, it can be hard to separate the facts from the fluff. In this article, we dive in and examine some of the top bitcoin myths. We offer some context and shed some light on what’s what with the world’s largest cryptocurrency.

Despite recent claims by Janet Yellen and others, the reality is that fewer than 1% of transactions are illicit, according to blockchain security firm Chainalysis. The very nature of bitcoin makes it unattractive to most criminals. All bitcoin transactions are recorded on the bitcoin blockchain, a public ledger. This means that anyone can view and scrutinize any transaction at any time. It’s also permanent: once a transaction occurs, it cannot be removed or changed by anyone or for any reason. Another myth is that it is completely anonymous. Blockchain is the first innovation in human history that permits us to record history on a public, immutable ledger.

This is not a myth; bitcoin is an experiment. However, this statement implies a negative connotation to the fact of bitcoin being an experiment. Many critics who hold this standpoint fail to equivocate this logic to fiat currency.  The United States Federal Reserve (“The Fed”) has only been around for about a hundred years, which, on the time scale of society, is an experiment as well. Elon Musk says, ‘Money is just a series of heterogeneous databases that are not real-time, with the exception of PayPal and a few others. The ACH system basically has no security. Any form of money has no power in and of itself except as an exchange of value between people for goods and services or to translate things in time like a loan.”

Myth #3: “Crypto is bad for the environment.”

It is true that proof of work mining is energy-intensive and requires a lot of hardware (GPUs) to run. Currently, most bitcoin mining is achieved using renewable energy that doesn’t pollute the environment. Also, it can be argued that proof of work incentivizes renewable/cheap energy because miners want to find the cheapest way to mine the next bitcoin block reward. It is important to note that a majority of popular crypto networks utilize proof of stake, and ethereum is in the process of merging to proof of stake in the ETH 2.0 upgrade. Proof of stake uses a tiny fraction of the energy used in bitcoin. The hardware to run a validator/node is nowhere near the cost of bitcoin mining rigs. It is likely that governments will continue to argue against cryptocurrencies for their environmental impact, and limit proof of work to bitcoin and few other cryptocurrencies.

While it is true that bitcoin has undergone several cycles of price discovery and contraction, it does not mean that bitcoin is necessarily a bubble. Bubbles generally are rare, non-recurring events in history. A bubble can be characterized as a market scenario in which the underlying asset/industry rapidly appreciates in value to unsustainable levels. This has happened in bitcoin’s price history several times. However, following each expansion and contraction period was price discovery – breaches of previous all-time highs for bitcoin. This indicates that there has been a growing demand and interest for bitcoin over time, or cycle after cycle. Bitcoin has seen bursts of interest and adoption through these past cycles, with the massive price appreciation, known as bull markets to crypto natives. On the flip side, general interest in bitcoin contracted during bear markets, including investors, media attention, developers, etc. It is during these periods of contraction in both price and talent where true believers, innovators, and talent brew, fermenting a network effect that will drive the next expansion period or bull market in crypto.

Another common false equivalency bitcoin skeptics argue is that the tulip mania in the 17th century can be used as a proxy for bitcoin’s end game. Simply put, in the tulip mania, there weren’t forthcoming cycles, bubbles, all-time highs or what have you. Arguably, the birth of personal computers, the internet, and the “.com” boom in the late 1990’s/2000’s is very representative of Bitcoin’s cyclical and volatile nature. Early days generally mean volatile days; take Amazon, for example, which IPO’d in 1997 at $1.50 a share (adjusted for splits) and ran up to nearly $110 in 1999. Following the astonishing run-up was a bear market for internet stocks and a 95% crash to $6 a share in 2001. It wasn’t until 2009 that Amazon’s stock price created new highs. Today, Amazon controls nearly half of all global commerce. Emerging asset classes have always been highly speculative and volatile. The extraordinary speculation in these markets has been crucial to fostering innovation.

One of bitcoin’s most sought-after features is its robust security; it has never been hacked, but central exchanges custodying the bitcoin (private keys) have been hacked before. There have only been a few bugs in bitcoin’s history (inflation bug), but over time it has had 99.99% uptime. In order to enact new rules or change aspects of the bitcoin network (change maximum supply), it will require over 51% of the mining power (hashrate). The hashrate has been a strong indicator of the strength of bitcoin. The gradual increase of miners participating in securing the production of bitcoin blocks, for a reward, has driven the difficulty of obtaining the reward up over time. Therefore, the security or in other words the resilience of bitcoin has only grown stronger with time. It would be very costly and inefficient to attack the bitcoin network. It is estimated that it can cost billions of dollars to attack the network; people are incentivized to participate and help secure the network to earn bitcoin.

Myth #7: “Bitcoin has no real world use cases.”

Over the years, Bitcoin has made significant strides towards improving user experience and finding real world use cases, but there is still a long ways to go. The lightning network is in development with the goal of democratizing access to users who want to use bitcoin for microtransactions such as buying coffee. In El Salvador today, Bitcoin is legal tender and the Chivo mobile app enables citizens to use bitcoin at stores with very small transaction fees. Slowly, but surely, bitcoin is becoming spendable for everyday transactions. The fact that it runs 24/7, that you can custody your own money without banks, and then use it at stores are all promising use cases. Crypto natives like to say, “Billionaires and boomers like bitcoin.” Deep liquidity and low drawdowns are some other reasons why investors with more capital may prefer to hold some of their portfolio in bitcoin. Bitcoin has the deepest liquidity and highest trading volume on a consistent basis. Of all cryptocurrencies, bitcoin (11/8/21) has a 45% market share, with the largest market cap of over $1.2 trillion.  Bitcoin has been a great hedge against fiat and gold and has consecutively had the lowest drawdowns of all cryptocurrencies for each previous bear market. The strong performance of bitcoin relative to fiat currency (inflation) is why S&P 500 companies like Tesla and large de-fi projects have started allocating their treasuries towards bitcoin.

In the eyes of the United States Government, bitcoin has been most legitimized alongside ethereum. In 2018, the U.S. Securities and Exchange Commission’s Director of Corporate Finance, William Hinman (Hinman), announced that the commission would not be treating ether or bitcoin as securities.  There were plenty of points in Bitcoin’s 13-year history where it was vulnerable, from many different attack surfaces. If governments had the ability to kill or compromise the security of bitcoin, they would have by now! We are witnessing the dramatic change of economics’ role in geopolitics. El Salvador has expedited foreign governments’ transformation into the digital age by recently enabling bitcoin as legal tender.

Myth #9: “Bitcoin will be replaced by a competitor.”

Bitcoin definitely has the first-mover advantage, solving the double-spending problem, creating digital signatures, and showcasing the power of having an anonymous creator. The development of bitcoin has been painfully slow, with only a handful of upgrades over the past decade. Bitcoin hasn’t been able to properly scale; the transaction fees are still high and block times average 10 minutes or more. Even today, the network still cannot understand external consensus messaging. This means that bitcoin has little to no programmability; at least, not without compromising security or other custodial risks, as it stands today. You cannot natively program smart contracts like you can on Ethereum’s application layer, however, you can have “wrapped” versions or derivatives of bitcoin in the form of tokens to interact with de-fi applications. Although the lack of programmability in bitcoin is limiting, it highlights one of the most attractive aspects of bitcoin – its slow and relatively predictable technological development.

Assume that bitcoin is secure, will stay regulated in the US as a commodity not a security as per the SEC; it shouldn’t be hard to imagine a scenario where something that both past and present government officials have dubbed “digital gold” can coexist with fiat currency. It is no secret that our current financial and payments systems are inefficient and slow. Both the private sector and governments are working on creating some form of digital currency to improve upon this problem and compete with the decentralized projects aiming for the same outcome. Central bank digital currencies (CBDCs) will likely be rolled out globally in the coming years. In fact, some are currently live in several major Chinese cities. The digital currencies controlled/created by the private sector and government will be censorable and centralized, two very unattractive traits for crypto natives. The ethos of crypto is that it’s decentralized. It puts the power back into the hands of the user and provides them with a choice; rather than submitting to the rules of others. Unlike the federal reserve, bitcoin has a limitation to its monetary inflation policy, and has done a great job keeping it that way.